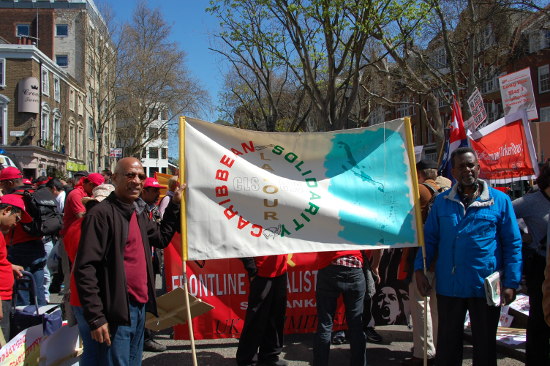 Caribbean Labour Solidarity (CLS) was formed originally in 1974 as the Jamaica Trade Union Solidarity Campaign (JTUSC), in response to an appeal for support from trade unionists in Jamaica, to mobilise protests against the Labour Relations and Industrial Disputes Bill. The Bill was an attempt by the big capitalist elements in the ruling Peoples National Party (PNP) to shackle Jamaica’s 135,000 trade unionists by restricting their right to strike and preventing making their decisive contribution to the struggle for an independent Jamaica free from imperialist control.

JTUSC comprised activists from the Caribbean community and the wider labour and trade union movement in the United Kingdom. The Campaign organised pickets, leafleting deputations and other activities against the Bill. When it became law in 1974 the members of JTUSC decided that there was a need for a permanent anti-imperialist organisation, which would promote understanding and activities in support of, what by then had become, a mounting democratic movement sweeping the Caribbean.

Thus it was that CLS was formed. Because of our roots in both the Caribbean community and the wider working class movement, we have been able to lay the basis for a broad solidarity movement here in Britain.

CLS is not tied to any political party in the United Kingdom or the Caribbean. We works to unite all those who support equality, democracy, justice and social progress in the Caribbean, We will support all who recognise that the struggle against racism, fascism, imperialism and neo-colonialism in the Caribbean requires the building of strong international links between the working people there and their sisters and brother globally.

We continue to play an important role, along with our sisters and brothers everywhere, in the worldwide peoples’ movement for justice through the publication of articles in a variety of media; production of our bulletin Cutlass; organising or participating in public meetings or conferences; arranging pickets and demonstrations; joining deputations; collating and presenting petitions; distribution of our literature; and other associated activities. Through these actions we continue to popularise the activities and causes of the anti-imperialist fighters of the Caribbean.

Through our links with the trade unions and solidarity organisations in Britain we set ourselves the objectives of mobilising opinion in aid of these struggles. In doing so we also recognise the special bonds that exists between black peoples everywhere particularly Africa, America and Europe despite the different conditions in which their specific struggles are waged.

As stated previously we also actively participate in the struggle against racism, which has been the springboard for the development of organisations like the British National party and English Defence League in the UK, the Front National in France, Golden Dawn in Greece and other fascist organisations now gaining strength in Europe on the back of the current economic crisis. We therefore support anti-racist, anti-fascist campaigns in various forms including exposing these fascist organisations; the fight against the police harassment of black youth, trade unionists and progressive workers; the fight against institutionalised racism in employment, education, housing and its other forms.

In so doing we recognise that the British Empire has bestowed a bitter legacy on sections of the working classes in the UK and the former colonies. As an organisation seeking to maintain and expand solidarity with the black workers and their allies in the Caribbean we already make a distinct contribution to the anti racist struggle in Britain.

Below are a few examples of the many successful campaigns undertaken by CLS. These should not take away from the fact that much work remains to be done: –

Our style of work

Our membership comprises of individual and affiliated members from the UK, the Caribbean & elsewhere who share an interest in Caribbean development. There is a modest annual fee for both forms of membership.

Our Executive Committee consists of members elected at our Annual General Meeting along with co-optees and comprising representative of affiliates. Current affiliates include organisations concerned with Grenada, Guyana, Jamaica, Venezuela and Cuba. The London Co-operative Political Committee is also an affiliate.

Our Executive meets once per month and we host a monthly open meeting, held on the first Sunday of each month, where invited speakers will open a discussion on aspect of the struggle in the Caribbean or elsewhere.

Whilst we have initiated and/or led a number of campaigns we also collaborative with other organisations whose objectives or campaigns are similar to ours. One of our most important roles is to further Caribbean unity, which we do by bringing organisations representing different territories closer together. We do not monopolise activities nor seek to take the credit for the successes in particular issues.

All those who share these aims to join us and to participate in our work. It is fun, informative and empowering.

In our work we collaborate with and seek united action with all sororial/fraternal groups that share our commitment to the anti-imperialist struggle. We need you to join us if you: –
Are interested in Caribbean and Central American development?
Are a skilled writer and/or organiser?
Have a flair for fundraising and possess the ability to secure resources?

We are also short of women in leadership roles. Join us change this situation.

Come and make your mark and build on the work done by the founders of this brilliant organisation.