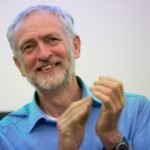 Jeremy Corbyn has been suspended from the British Labour Party. We think this is a disgrace. Jeremy Corbyn is a member of Caribbean Labour Solidarity. He has spent his life campaigning against racism and in defence of the rights of the oppressed. He has always opposed anti-Semitism, recognising it as a form of racism which should be abhorrent to all on the left.

We totally reject any accusations of anti-Semitism against him, or that the Labour Party was anti-Semitic under his leadership. Despite the headlines and spin put on the EHRC report, we note that the contents overall would not support any such claim.

We stand in solidarity with Jeremy Corbyn and believe that his record speaks for itself. As an organisation we will continue to campaign against all forms of racism and for Palestinian rights.