The University and College Union (UCU) branch at the Grand Parade campus of the University of Brighton passed the following resolution, which has been endorsed by the CLS executive:

This branch expresses its dismay that the Shadow Secretary of State for Education, Rebecca Long-Bailey, has been sacked for retweeting an article from The Independent, by the actor Maxine Peake, which linked Israeli training to the ‘knee on the neck’ tactic of restraint. The branch notes that this is not an egregious link: the tactic is widespread in its use by Israeli forces against Palestinian protesters, and that the training of US law-enforcement officers by Israeli agencies has been in existence for many years. In the circumstances, Peake’s inference is more than justifiable. What is certain, however, is that the inference is not antisemitic. Nor was it antisemitic for the article to be forwarded by Long-Bailey.

The branch is disturbed by the implications of the sacking: that factional policy differences within the main opposition party, in this case over education policy, should be resolved by the use of smears and the misapplication of the term ‘antisemitism’; and that the recent systematic attempts to silence criticism of Israel and Israeli policies, or of Zionism as a political movement and ideology, should be continuing in this manner.

and if Starmer was really serious about anti-racism, he would have given much more strenuous support to the Black Lives Matter movement.

Further, we endorse the statement of “Labour BAME Network”: 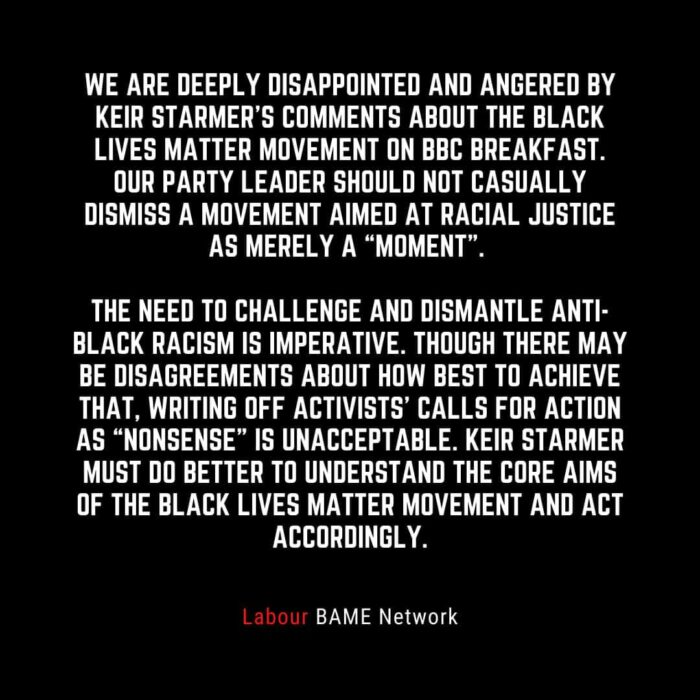