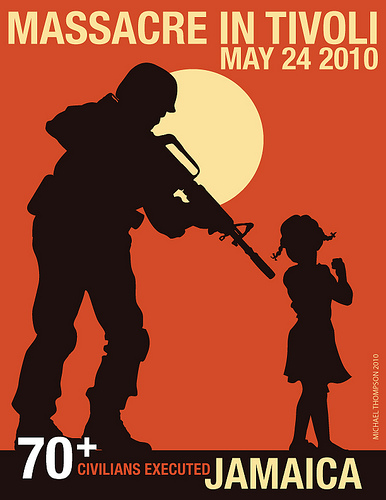 Many firsthand accounts suggest that the killings were carried out by the Jamaican security forces long after the neighborhood was under their control. The operation was assisted by a surveillance plane from the U.S. Department of Homeland Security, which was flying above the neighbourhood and relaying information to the Jamaican authorities. Under the state of emergency (which was in force between 23 May and 22 July 2010 in selected parishes), more than 4,000 people, including several children, were detained without charge. The vast majority of those detained were released without charge.

A commission of enquiry even with “international” commissioners can do no better than the public defender IF the there is no commitment in advance for the government to commit to referring the matter to the International Criminal Court.

As a signatory to the Rome Statue of the ICC (though not ratified) the government can under Article 12(3) of the ICC Statute invite the ICC to exercise jurisdiction over the matter. We believe that this is the ONLY way to ensure that any enquiry which uncovers evidence that those who had command responsibility for the massacre have a case to answer (as we believe they do) that there can indeed be a prosecution.” This is the only way to satisfactorily resolve the issues of this, the worst massacre since 1865 Morant Bay massacre.

CLS wholeheartedly supports the Tivoli Committee’s call and will be campaigning for this position in the labour movement and the wider community.