Speaker: Steve Cushion (author of Sir Robert Geffrye and the Business of Slavery) with Brian Richardson 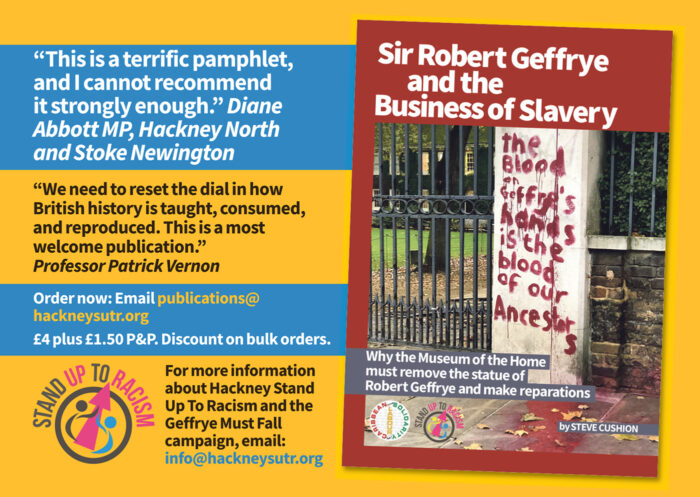 Steve’s pamphlet has been produced as a general education tool about the involvement of the British establishment in the North Atlantic Slave Trade. It also is a specific resource for the #GeffryeMustFall campaign.

After Black Lives Matter activists brought down the statue of the C17th slaver Edward Colston on 7 June 2020, many institutions in the UK began to re-evaluate their own monuments to slavers.

The board of trustees of the Museum of the Home, Hackney, opened a public consultation in partnership with Hackney Council over what should be done with their statue of the C17th slaver Robert Geffrye which has stood over their main building since 1913 (just before the structure became a museum). In July 2020, the board admitted that “the response (of their consultation) was that 71% of those who took part were in favour of removing the statue”. But despite admitting that their own public consultation showed a majority wanted the statue removed and that Geffrye “profited directly from the buying and selling of human beings” the trustees announced, in July 2020, that they were not taking Geffrye’s statue down, arguing the issue was “a complex debate, full of nuance and different opinions”. In the following weeks it came to light that the British government, in the shape of the-then Minister for Culture, Oliver Dowden had intervened to put pressure on the trustees to keep the statue on its plinth. Dowden argued for a “retain and explain” policy, which has meant very little apart from defending monuments to slavers. Other ministers joined Dowden over the autumn and winter of 2020/21 to fight a very vocal culture war against what they termed “baying mobs” and “work worthies”. Dowden’s tactics over the Geffrye statue were widened to encompass the UK’s entire museum sector. The UK government is now telling curators and museum workers across Britain what they can, and cannot, display and that they must teach a deeply reactionary and one-sided version of ‘history’ which is more myth than reality. HSUTR has been campaigning for nearly two years to have the statue brought down from its plinth above the doors of the museum and to have it relocated within the museum where the facts of Geffrye’s active role in the slave trade can be told.

Steve Cushion’s pamphlet is a concentrated history of Geffrye’s life and times which demolishes the myth that he was a ‘passive’ investor in the Royal Africa Company and the East India Company. Steve shows that Geffrye was very much an active participant in directing the operations of both companies and that he was a slaver.

Steve also shows that Geffrye’s life cannot be compartmentalised with some of it tainted by the slave trade and another part involved in more innocent industry as part of the Worshipful Company of Ironmongers. Steve shows that there was a clear crossover been both spheres of Geffrye’s life. Geffrye made money from iron and that iron was used to manacle the slaves he traded in and his ship – the China Merchant – carried both iron and slaves as part of the nascent ‘triangle trade’. Steve’s also follows Geffrye’s rise through the ranks of London’s elite as he negotiated the commonwealth, the restoration and the so-called ‘glorious revolution’ of 1688. Steve also puts Geffrye’s charitable works into the context of the period and exposes them as less than altruistic. Finally, Steve looks at recent biographies written on Geffrye’s life. Three have been produced by the Museum of the Home and all have ignored or drastically downplayed his role as a slaver, and all are on sale in the Museum of the Homes’ bookshop.