The Arc from Kidnapping to Enslavement, Toppling, Renunciation and Reparations

On 7 June 2020, the people of Bristol came together and toppled the statue of the notorious kidnapper of Africans, Edward Colston, into the Avon River. This was after many years of campaigning for its removal from the city centre. The horror of this so-called “trade” is something that haunts the descendants whether in the Caribbean, the Americas or UK.

The deliberate torture of the process of enslavement began before the kidnapped were trafficked across the Atlantic. This resulted in the capture and killing of more than over 200 million Africans, a holocaust resulting in the economic and psychological damage to the descendants of the kidnapped along with the huge and continuing material damage to the people of Africa. 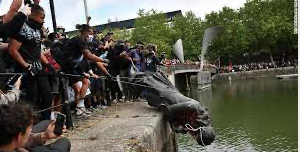 This meeting will examine the Arc of Enslavement/History with a report of its process and effect from Cape Coast Castle, Ghana, the largest kidnapping centre in Africa; the removal of Colston’s statue and the renunciation of the “history” it represents, along with increasing calls for reparations.

Caribbean Labour Solidarity is pleased to announce that we have secured the presence of Kofi Tetteh, an expert on the history of Cape Coast Castle, and Rhian Graham, one of the Colston Four defendants. Also, Luke Daniels, President of CLS, will speak on the significance of reparations, and Dr Steve Cushion, a Research Fellow at University College London, will present the case for the removal of the statue of Robert Geffrye, another notorious kidnapper of Africans.