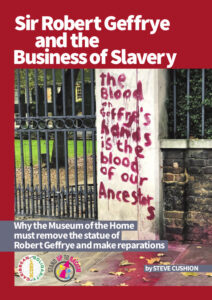 Single copies: £4 plus £1.50 post and packing.
Email orders to publications@hackneysutr.org

The debate over the statue of Sir Robert Geffrye (1613–1703) outside the Museum of the Home in Hackney has opened a window onto the slave trade and its role in the creation of modern Britain. As a successful London businessman and politician, Geffrye’s life well illustrates the early development of capitalism in England and the relationship between the City of London and the origins of imperialism, particularly the importance of the whole business of slavery.

The Museum is a valuable and informative institution. It should be celebrated. But the statue to Robert Geffrye should not. The statue is a mark of honour and celebration of his life and work. But his life and his work were both thoroughly dishonourable. They should not be celebrated.
The opponents of decolonising our public spaces are determined in fighting for the statue to remain. They advance the ridiculous argument that those who want the statue removed are trying to rewrite history. This is hollow. We used to execute people in public in this country. We do not celebrate that by maintaining the hangmen’s gallows on public display.

The National Education Union applauds this booklet which shows why the Geffrye statue should be removed from the museum…. The arguments put forward by government that we shouldn’t erase parts of British history miss the point. We don’t want to erase history, but we don’t need reminders in public spaces of the horrors of the racism that underpinned slavery and colonialism. We want to teach a history which both acknowledges the truth about colonialism and slavery, and which recognises the histories of resistance, achievement and cultures of the global majority.