£2 including p&p. Available from s.cushion23@gmail.com
You can pay by cheque, bank transfer or PayPal.

Our reply to the UK Government’s Nationalities and Borders Bill, by Luke Daniels, Nadine Finch and Steve Cushion 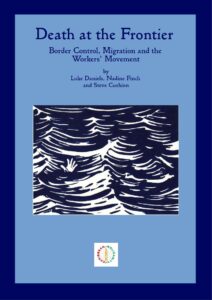 The present government’s Nationality and Borders Bill has reignited the discussion about border control and labour migration. The official discussion about immigration concentrates on the needs of the economy and the so-called labour market. In other words the matter is observed from the viewpoint of the employing class.
Caribbean Labour Solidarity, on the other hand, seeks to analyse the situation from a working class standpoint. This has led us to the conclusion that workers’ organisations should welcome migrant workers and concentrate on uniting all workers to oppose capitalism.
Today, the world is in crisis with poverty, famine and war forcing whole populations to seek a new life in richer areas of the world. Meanwhile, hard, militarised borders, such as the Mediterranean, the English Channel and the Arizona desert, are claiming thousands of lives every year. Much of this migration is caused by the detrimental effects of climate change.
Under capitalism there is an international division of labour with a hierarchy in which the most developed capitalist countries exploit the rest through the medium of finance capital and industrial corporations, backed by superior weaponry and fire-power.
One of the accusations against immigrant labour is that they undercut, and thereby reduce, the wages of the workers who are native-born citizens. We argue that the lowering of wages, the increase in hours of work and the deterioration in health and safety standards are the direct result of the failure to stop an employers’ offensive based on deregulation, privatisation and outsourcing.
The real villain is the British capitalist, not the Polish plumber.
Hard borders exist as much to prevent people leaving their country of origin as to prevent their arrival elsewhere. A cross-border, internationalist working class movement is needed to fight for a world-wide minimum wage and maximum hours of work, for parity with the best available. Why should a Haitian or Jamaican worker be expected to have a standard of living so much lower than the norm in Europe?
From a working class point of view, we should not be calling for restrictions on migration, but rather fighting to place the maximum restrictions on capital.
Workers of All Countries Unite!