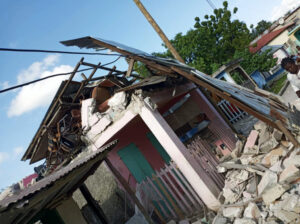 A fatal earthquake struck Haiti’s southern peninsula, measuring 7.2 on the Richter Scale. Current reports tell us that at least 1,300 people are known to have died died. Thousands have suffered horrific injuries, and more still have seen homes, workplaces and community spaces destroyed.

We have been here before. Those of us close to Haiti will never forget the devastating 2010 earthquake that killed close to 200,000 Haitians. The self-titled international “community” swooped in, promising radical change while it squandered hundreds of millions of dollars in failed and corrupt reconstruction efforts.

As the Haiti Support Group reported:

“Haiti’s apparent fragility to ‘natural’ disaster is no accident. The world made it that way. After the 2010 quake, disaster capitalists promised recovery & resilience. Instead, they became richer as Haitians were systematically excluded.”

Beyond the elite, who benefited handsomely from their dealings with western interference, Haitians endured an ongoing political crisis, a deadly cholera epidemic introduced by the UN that killed 10,000 people and sickened up to 100,000 more, abusive aid workers and violent peacekeepers found guilty of raping and sexually assaulting children, and a recently assassinated president who had been ruling by decree.

And once again the international “aid” vultures are circling overhead. Haiti cannot be forced to go through this charade over and over again.

Grassroots organisations are best placed to respond to this crisis. Listen to them. Support them. Send your money to them. They are the ones clearing away the rubble and rescuing those trapped. They must lead the recovery effort so that the towns of the southern peninsula can not only repair but are also able to build for the future.
How can you help

Further information and updates from the Haiti Support Group