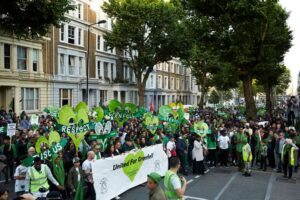 It has been four years since that fateful day of the Grenfell fire, that claimed the lives of 72 people, yet not a single person has been held to account. The Grenfell Inquiry is to date, ongoing.

What happened on the 14th June 2017, is a true national tragedy, and one that was entirely avoidable.

We stand in full solidarity with the families and friends of those whose lives were lost, in remembering and commemorating their legacy.

We stand in solidarity with Grenfell residents; such as Edward Daffarn and all who survived, as well as organisations such Grenfell United, and Justice4Grenfell, in calling for justice for those whose lives were so painfully impacted by the events of June 14th 2017.

We will never forget those lives lost, and will always stand firm in calling for justice, for the 72, their families, and friends.

On this day; 14th June 2021 on the fourth anniversary of the Grenfell fire, we commemorate, and pay our respects to those innocent lives lost, but never forgotten.’